On Wednesday, Oct. 11, Hurricane Michael slammed ashore as the strongest storm to ever strike the Florida panhandle.

I had been watching the storm since its start as a small low pressure system off the Yucatan Peninsula, and was not all that surprised to see it develop into a hurricane as it fed off the warm waters of the Gulf.

But what was shocking was just how strong it got right before making landfall. Overnight, the storm ramped up to a borderline Category 5 hurricane with 155 mph sustained winds. This was going to be a really bad storm, and it was bearing down on a lot of people who anticipated something far less serious.

As I watched the storm steamroll Mexico Beach on a storm chaser’s live Periscope stream, I started feeling increasingly anxious. I couldn’t imagine losing everything and trying to get my life back on track in the wake of a disaster like Michael. I felt compelled to help my fellow Floridians somehow. 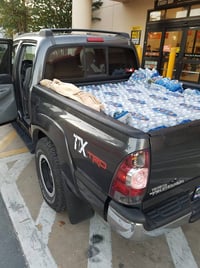 I was ready to hop in my truck that moment and hit the road. Considering I had no plan and the storm was still coming ashore, I am grateful to Head of School Kevin Plummer for reining me in when I frantically told him I had to get up to the panhandle.

Taking a few steps back, I looked at what was plausible for me to pull off on short notice. I began reaching out to relief groups in the area and established correspondence with the Cajun Navy, a civilian volunteer group that formed after Hurricane Harvey inundated the Houston area in 2017.

After a few quick phone calls to friends and family, I got enough money together to buy half a pallet of water (42 24-packs), some heavy-duty tarps and extra fuel. With my truck completely loaded down with supplies, I headed out Friday night to rendezvous with the Cajun Navy folks and first responders in Chipley.

As I was driving, I noticed an abundance of like-minded Floridians. Truck after truck carrying water, generators, fuel, food, and other necessities passed me on the way to the panhandle. It was reassuring to see people coming together to support one another.

More and more trees were either snapped in two or laid down entirely the closer I got to Chipley. Billboards were shredded, debris lined the sides of the highway and there was a strange stillness now that the storm had gone.

When I arrived at the emergency operations center on Saturday, I was told a group of us would be escorted into a community that had yet to be contacted by first responders to distribute food and water. 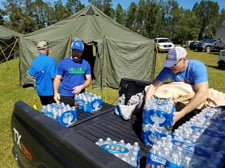 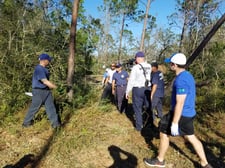 We drove for about an hour before turning down a dirt road, and every mile we covered was littered with destruction. Not a single power line stood and electrical cables hung from trees or lay on the ground, homes were completely toppled and huge swaths of pine trees looked like they had been hit with a buzzsaw. 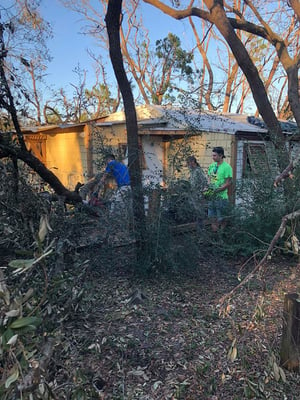 The people who lived down that dirt road had been cut off from the world, and they were more 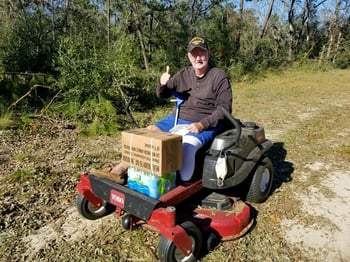 than just grateful to receive supplies - they were truly relieved. I remember one man who remarked that he had no idea if anyone would show up to help. I knew I was in the right place.

Twenty-four hours later, I was grateful to be back in Tampa. It had been an exhausting effort, but I still had a home to return to, unlike those in Michael’s path.  Aside from reaffirming the importance of living with “A Higher Purpose Than Self,” the experience was truly a lesson in humility. Appreciate what you have, and don’t be afraid to help others — it’s likely you will need someone to lend you a hand one day.