Being a Multi-Sport Athlete: The Pathway to Success

It is common knowledge that for athletes to be at the top of their game, they need to develop and master skills specific to their sport. You may hear professional golfers talking about a “light” 6-hour practice day of 5,000 swings or professional basketball players talk about taking 100+ foul shots every day.

It seems natural, then, that many parents feel the only way for their children to someday become professional athletes is to emulate the routines of their athletic idols or follow the “10,000 hour rule” from Malcolm Gladwell’s book Outliers. As a result, it often can seem like children these days have specialized in one sport by the time they are able to walk. The stats, however, are not in their favor.

Are we are doing an injustice to our youth by making them specialize in one sport at such early ages? Burnout is hitting an all-time high with many high school athletes stating that by senior year they just don’t like the game anymore. Why? Parents and coaches have put such an emphasis on winning and practicing the same sport-specific skill over and over again, that they are losing what drew the students to the sport in the first place: having fun.

My advice as an Athletic Director, a former collegiate and professional athlete as well as a  parent is to allow your child to explore a variety of sports, from youth to high school levels and put emphasis on their work ethic, sportsmanship and what it means to be a team player.

What every college coach in the nation really wants is to recruit a well rounded, multi-sport athlete. The crossover of skills from soccer to basketball to lacrosse to baseball are much more important than you think. The defensive and space concepts, strategic planning and execution as well as lessons learned from a diversity of coaches are all assisting in the overall growth of a student-athlete.

I had the opportunity to speak with Pat Summitt, the former Head Womens’ Basketball Coach at the University of Tennessee, and I asked her what she looks for in her recruits. She smiled and said she always tried to sneak into the gym to watch a recruit, sitting behind her parents without them knowing she was present. She stated that a parents behavior in the stands was extremely important to her. Were they positive and supportive of the coaching staff and entire team or were they screaming at officials and looking to place blame? She never wanted to see a recruit do well in the game she attended. In fact, she wanted them to fail so she could see how they would react to adversity. Lastly, she stated that she would only recruit players who were multi-sport athletes.

I cannot recall the score of any of my youth games, but I do recall the fun I had with my friends whether we won or lost. The last time I checked, there were not any college coaches at youth sporting events handing out scholarships, so with all of this in mind, I encourage you to allow your child or student-athlete to grow through the benefits of being a multi-sport athlete as well as be the supportive parent to the coaches, officials and entire team.

BELOW: Chris Lavoie pitching for the University of Vermont 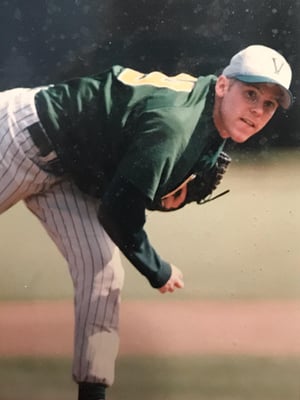 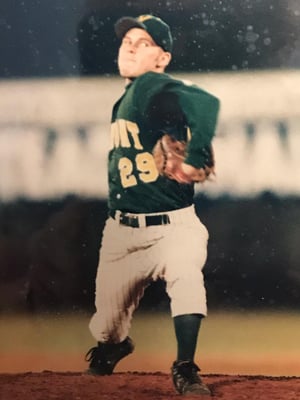