LATIN: Not Dead Yet

Throughout my life as a student and continuing into my career as a teacher, I have been asked by countless peers and colleagues alike, “why Latin?” For what purpose could a young man growing up in the turbulent, technology-driven, progressive modernity that we find ourselves in at the current juncture possibly find in studying a “dead” language spoken by a people long lost to the ebb and flow of history? As it turns out, I have given my fair share of different answers to this question over the years, and just as language and humanity are in a constant state of flux and evolution, I find that my response to the aforementioned question has continued to change with age, and I hope that throughout this short exposé you can find traces of my varied answers to the question, “why Latin?”

For myself, my experience with the Romans first came as a young child studying at St. Patrick’s Catholic School in Tampa, which is now sadly defunct. Throughout my time at St. Pat’s, I had taken religion classes on and off throughout my time in both the elementary and middle school, and on occasion, we would learn about these people known as “the Romans.” The teachers would never go into much detail, and all I can recall being taught was that they were a bloodthirsty, war-like and inventive people. As an eighth grade boy, I remember thinking something along the lines of, “These guys sound pretty neat!” Hearing about these people in snippets throughout history and religion ignited my curiosity, and finally, the time came for me to move on to high school.

I was in the process of choosing my schedule as a newly anointed Robinson Knight, when I took pause as I reached the World Languages section of the handout. I saw it: Latin I! As a student who found value in both history and language, I knew that I had to jump on the prospect of being in such a class. I had only the impressions my previous teachers had given me, and I wanted to learn more about these people I had heard about in hearsay and piecemeal discussions. “The Romans” had a negative connotation throughout my middle school career, but now I was getting the chance to immerse myself in the culture of “the other” that I had heard about before. Were they as scary and powerful as they had been made to sound? Was this class going to confirm or refute my opinion on these mysterious people? I decided that I simply had to take the class, regardless of what my parents wanted for me. It was a decision that would change my life, and ultimately begin laying the path for my arrival at Tampa Preparatory School.

I remember going to Mr. Earle’s class at Robinson and being totally enthralled with the subject matter from day one. We would hear about not just how to read and write in a language that had a history which spanned across millennia (which is already super cool), but also about how Roman cities were laid out, what people thousands of years ago thought about what happened after death, stories about great heroes and mythical creatures, powerful generals and the strategies they used to outsmart and vanquish their foes, what kind of foods the Romans ate, and the list goes on and on. In short, I learned very quickly that there is more to taking Latin than simply learning grammar and vocabulary. 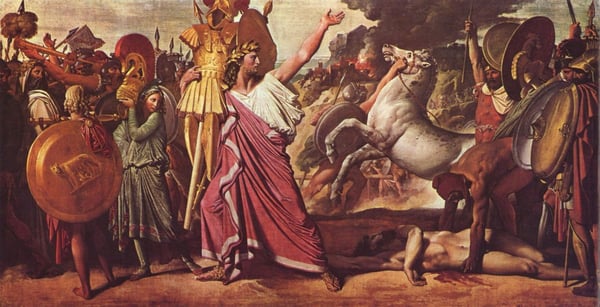 Taking Latin is not only a constant process of learning language and then synthesizing its component parts to accurately translate a passage. Instead, it is an amalgamation of all of the core subjects masquerading as an “elective.” It is an exploration of the world from a perspective vastly different from modernity, that lends credence to and explanation of modernity. Being a student of Latin opens one’s eyes to:

Just over 60% of all English words possess a root in either Latin or Ancient Greek, and many grammatical concepts created by the Romans have carried on and survived the tests of time to exist and continue to thrive within modern English. For all of these reasons, outside of the obvious pure joy of learning an ancient language, I decided to consider taking the language for a few more years as I moved into my university studies.

After my first year at the University of South Florida, I abandoned my pursuit of physics and astronomy (subjects I still love and am enthusiastic for to this day) to embrace the subjects that most sated my curiosities about the world: history and Latin. These disciplines allow me and others to attempt to understand the totality of the human story, and I find that being aware of how the past has impacted the present has made me a more open-minded person than I ever could have envisioned.

Latin is more than just a language, it is a hybrid discipline that transcends time and locale, and has the power to spark imagination and understanding in each and every student. That is why I decided to become a Latin teacher: to ignite and sate the same passions that dwelled within me as an adolescent, and continue to be present within my soul to this day. I view my profession much the same way that ancient peoples viewed teachers and historians of their own: keepers of the old ways and ideas, while using their position to teach lessons to better inculcate an understanding of the world for next generation to come.

It is impossible to fully convey the complete scope of the impact of the Latin language and the Roman people have on the history of the world, and as such, the history of humanity. I hope that my small musings about my own path to being a Latin teacher can better explain to others why some students choose Latin. The language, through strict linguistic definition, is in fact “dead,” however, the language remains very much alive within each and every student that chooses to study not just a language, but a way of life that touches all disciplines. That is why I chose to take Latin, and I hope one day, you will give it a chance as I did.