WHY LATIN?
by Upper School Latin teacher, Will Harvard

When people ask, “Why Latin?” I answer, “Because Latin is everywhere.” For example, the inside of the senate chambers has been in the news lately. But travel down the hallway and you will find yourself in the House of Representatives. Have you ever really looked at the architecture and details of that room or wondered where all the symbols originated?

If we look upon the floor of the House of Representatives, our eyes would be drawn to the front of the room where a single lectern is centered among the balance of seats around it. 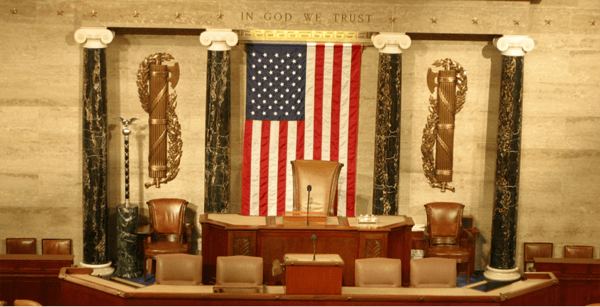 We most often see this room on television during State of the Union addresses given by the President of the United States. This seating structure is called the rostrum, taking its name from the rostra in Ancient Rome, where politicians would deliver speeches in the public area known as the forum. But right behind the rostrum on the floor of the House of Representatives is the prominent display of the American flag. The positioning of the president, flanked by the speaker of the House and the vice president, together with the colors of the American flag glowing in contrast to the dark walnut of the rostrum, presents a beautiful symmetry of power and patriotism.

However, when we pull back and take in the whole scene of the rostrum, flag, and the rest of the room, we see

two identical symbols on either side of the American flag. These symbols are known as the fasces; a bundle of rods bound together with the head of an axe placed at the top. The fasces predate Republican Rome and are of Etruscan origin. For the Romans, the fasces represented imperium, or power, for the consuls in Rome. Lictors, like modern day bodyguards, would carry these fasces as they attended to the magisterial powers, whether they be kings, consuls, or later emperors. For the House of Representatives, these fasces are wrapped in laurel branches, another ancient image. The laurel branches are attributed to Apollo, and were the original prizes given out at the first ancient Olympic Games. They are most often interpreted as a sign of victory.

When we look upon one of the most important rooms in our government, and therefore our nation, we see at the center, our nation’s flag flanked by two very ancient Roman symbols of power. It should not be lost on us that these symbols meant something to the founding fathers of this country. The founding fathers were deeply influenced by the Roman Republic and its values, in addition to those put forth by the Classical Greeks. One only has to read Polybius or Aristotle to see their influence in the Federalist Papers. To understand ancient Rome and Greece is to understand the education and influence of not only the founding fathers, but all of Western Civilization for the past two thousand years. For better or worse, the writings of the ancient poets, politicians, generals, and philosophers have shaped from age to age the world we now live in.