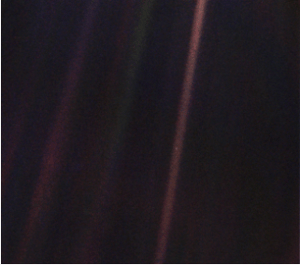 “Look again at that dot. That's here. That's home. That's us. On it, everyone you love, everyone you know, everyone you ever heard of, every human being who ever was, lived out their lives. The aggregate of our joy and suffering, thousands of confident religions, ideologies, and economic doctrines, every hunter and forager, every hero and coward, every creator and destroyer of civilization, every king and peasant, every young couple in love, every mother and father, hopeful child, inventor and explorer, every teacher of morals, every corrupt politician, every "superstar," every "supreme leader," every saint and sinner in the history of our species lived there-on a mote of dust suspended in a sunbeam. “ Pale Blue Dot -  Carl Sagan

This excerpt from Sagan's book Pale Blue Dot, inspired by an image of earth taken 4 billion miles away by Voyager 1,  shrinks all the human experience in one cocoon and allows us to transform our identities beyond our cultural borders. In the final episode of the Netflix show “One Strange Rock,” NASA astronaut Peggy Whitson talks about her experience of spending more than 600 days in space and how that expanded her concept of what is “home,” how it allowed her to zoom out of her local, state, nation, mindset.

“Home for me when I was growing up was the farm [in Beaconsville, Iowa] and the small community around it. After starting college, home became a little bit bigger because it expanded to the other side of the state. Then I left Iowa and went to Texas and Iowa become my home. I started traveling to Russia a lot, and so home became the United States of America, but I think once I left the planet, home was planet Earth. So, I think it's all about perspective."

Almost every astronaut has had the same epiphany. Psychologists call it “the overview effect,” a cognitive shift in awareness. From space you can’t see the details of borders, you just see a big earth, all connected, water flowing, land continuing from one continent to another, a much more holistic image of our existence than humans had even had access to before space travel.  Differences are non-existent from space. All you can see is the shared home, our common space.

We don’t all have the opportunity to go to space to see our home as a “mote of dust” and recognize that we are all sharing an experience together as a species, seeing our commonalities instead of our differences. However, we can create opportunities to step back and make our world view a little wider. We can do this through travel and student exchange.

For the past week, students from the Hochrad School in Germany stayed with Tampa Prep families and shared a little bit of their culture, made lifelong friends, shared the language of music and expanded their--as well as our--world views. These experiences, which Tampa Prep facilitates, allow students to start to see what they share in common with people from another culture, country, who speak another language, instead of seeing the barriers and differences.

It is always amazing to see how easily students create connections with exchange students. It is a moment for Tampa Prep students to be curious, accepting, caring, and welcoming.  Joseph Labarta, an 8th grade student whose family hosted two Hochrad students, said, “It was really sad when they left. We have been texting every day. We just really clicked. They just wanted to hang out. And they were really interested in the culture. They wanted to be in the pool all the time and just hang. We were already discussing having them back in two years or maybe meeting them in Germany with my family.”

Creating global citizens doesn’t mean just teaching students another language or how to identify capitals on a map. It means giving students perspectives that allow them to understand, accept and identify with others.  With young people, it means giving them opportunities to create bonds with people from another corner of the globe. Being global starts with understanding we are all on the same “mote of dust suspended in sunlight.” That's easy to do when you're young and can just hang out with people from around the world. Sometimes that alone is enough to become a global citizen.