Get Lost:  The Benefit of Unmapped Moments

We live in a hyper-structured society. We use alarms, all use the same phone, drive on paved roads, go to work on a schedule, live in cities and suburbs organized on grids, progress through school year by year, followed by college, internship, job, etc.  So sometimes we need to break free from this structure and just get lost. For most people, "lost" has a negative connotation. We need to know what we are going to be when we grow up, we need to be able to always follow along in class, we need to have a life plan, it is considered weak to stop and ask for directions. Lost is bad. Everything with a purpose is good. But I think being lost is healthy sometimes, and frankly, relaxing. 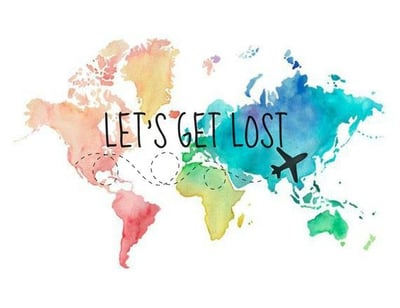 In 2002, I was wandering in the streets of Rome, no money for museums or shopping, no planned tours, no return ticket for France (where I was living at the time), just wandering and noticing . . .

If only we could pull out our brain and use only our eyes. -Pablo Picasso

. . . drinking the occasional coffee, staying out into the wee hours of the morning, memorizing the smell of the markets, spying a delightful ignored sculpture in an ancient alley, feeling the rhythms of the city, and doing it all over again the next day. In those days of wandering and purposelessness, magic happened. We’ll get back to this.

Fast forward to a few weeks ago at the Gaylord Palms in Orlando. Not particularly comparable to Rome, Italy, but all the same I was lost again. All the Middle School teachers were at the Gaylord Palms for a conference. Mrs. Calandra (Music teacher) and I were rooming together. For all of us, there was a generally happy mood. We were all relaxed to be at a conference together, out of our routine, and having new experiences. Every time Mrs. Calandra and I ventured from our room to the conference or back we inevitably made a wrong turn, got lost, ran into a dead end. The Gaylord Palms is quite large . . .

The mind should be allowed some relaxation, that it may return to its work all the better for the rest. -Seneca

. . . and we even walked in a complete circle with Ms. Grosso (Science teacher) and Mrs. Sanford (Social Science teacher) one night, through a buffet restaurant, ending up right back where we started. Magical laughter ensued. During another wrong turn, “You keep going the wrong way. You don’t have a very good sense of direction” said Mr. Quattrone (P.E. and Health teacher). His comment gave me pause, but then I giggled and thought, “I love being lost.”

Somewhere, something incredible is waiting to be known. -Carl Sagan

I have been thinking about this idea of “being lost” since that evening at the Gaylord. I don’t love being lost when I am late for an event or a party, but when I have time, I feel great being lost. I feel me and I feel the deep pulse of the world around me. We are generally driven in our lives by systems imposed by others; schedules, the geography of our communities, the language we speak, the curriculums of our schools, the GPS telling us the exact route, or the cookies feeding our web pages on our internet browser. So getting lost is like saying "buzz off" to those systems and breaking free, however briefly. And we all know what happens when we break free: creativity flows and we are unleashed!

The chief enemy of creativity is good sense. -Pablo Picasso

That evening at the Gaylord Palms, we brainstormed at the dinner table, we laughed, we did some troubleshooting, we were flowing. I can’t promise that being lost was the reason for the good energy but generally when I let go and get lost, magic happens. Rewind. Back to Rome 2002. I was lost with nothing to do when I happened upon a Portuguese man, who turned into a best friend, a debate partner and, eventually resulted in two kids, a gecko, three rats, two turtles, a few more languages, and lots of adventures. Getting lost can be very rewarding. So take time to tinker, to turn the wrong way, to shut down the GPS, take the country road, throw caution to the wind and just be lost. Maybe, just maybe, magic will happen.